On the 28th December 2016, twelve hardy souls met up in a hotel in Marrakech ready to embark on their High Atlas Adventure to summit Jebel Toubkal. These are the posts to Facebook from that trip by one of those hardy souls – Jane Tolhurst. Some of the posts and pictures were posted retrospectively.

Day one of our trek to Toubkal. Minibus ride from Marrakesh stopping off to buy provisions. Our starting point was a ski resort . There has been unusual amounts of snow and the resort was in full swing; street vendors selling second hand ski boots and children’s sit on toys refashioned into toy snow mobiles. Our mules were laden up and we met our chef for the trek. No mint tea here but hot sweet liquid made from an infusion of mountain herbs.

The trek today was physically challenging, steep climbs in hot sun, already at altitudes of over 2000 metres. Our lunch stop was a breathtaking col and from here we could see the mountain range lying before us, with our summit in view. Crampons were needed for the steep, snowy descent. We could hear sheep and goats call from the mountain tops and large birds of prey were riding on the thermals and calling. A Berber Shepherd, his young sons and dogs were taking time out, running up the steep snowy banks with ease and sliding down on improvised sledges.

During our descent we could see Berber villages nestling into the hillside blending in to the mountain side being constructed from the local mud. Our accommodation tonight is a mountain refuge based in a busy village, a jumble of houses intersected by narrow paths. People, chickens, sheep and horse share the space within the village. Our entrance was a cause of much interest from groups of small children to the giggling of adolescent girls looking beautiful with jewelry and fine fabrics. It is cold cold cold. No hot shower and just a central fire place. I’m now in my sleeping bag contemplating what else I can put on. The nights will only become colder as we head further towards the summit.

Loved these little lads, walking on their own up the enormous hill. They were spirited and a little bit naughty. They weren’t impressed when they saw that I had caught them on camera and shook their fists at me. I waved. 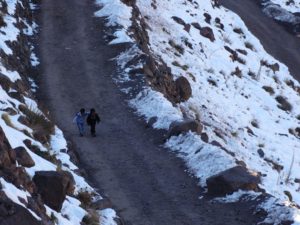 Tonight we are at Base Camp. Amazing walk up. A steady climb using crampons earlier than anticipated due to the heavy snow falls in recent weeks.

The mules had to be left lower than usual as the track was too difficult for them. A busy path with climbers from across Europe and North Africa, some of them in entirely unsuitable footwear and no crampons. I enjoyed stopping and chatting, finding out where they were from and what their climb had been like.

We are coping quite well with the altitude, drinking lots and just slowly taking one step at a time. We must be burning a lot of calories. Despite a large breakfast I was absolutely starving well before dinner time. Fortunately we came across a make shift cafe by the side of the mountain path. The young entrepreneur was serving delicious freshly squeezed orange juice.

The views were just stunning, blue skies, snow, cascading water, icicles and mountain peaks. When we reached the mountain refuge it was time for our ice axe arrest training. The first section of our walk tomorrow includes a steep ascent where a slip may have serious consequences. I have to say me and David had to consume a large bar of chocolate and a drink of hot chocolate before we were ready to throw ourselves down the snowy slope.

The refuge is very full; a degree of excitement with climbers from around the world. I’m in bed now and I’m sharing the smallish room with about 18 others. We are waking at 4 am, to start the climb at 5 am. Walking to start with by head torch. 5 hour climb up, 2 hours back down when we will have lunch. That’s an awful long time without grub so we’ve resorted to the purchase of yet more chocolate. No idea what this experience is going to be like, what I do know is that it’s going to be physically tough.

Sitting in bed sipping mint tea, showered, duvet jacket on, resting my weary legs. David’s gone off with the other men to get cleaned up in the ham mam. Oh how I would like to be lying down on a hot tiled floor and have buckets of hot water thrown at me but it is men’s night so it’s not going to be.

This is our last morning in the mountains and after a very early start yesterday we’ve been given a lie in by the cook, breakfast being served at 9am. This of course is sheer hell as we’re starving. I’ve managed to source some citrus fruit so I’m at this moment in bed with an enormous orange trying to warm it up sufficiently to eat.

Yesterday was a day that seemed to include about 3 days. We retired to bed on New Years Eve at about 8 pm in readiness for a 4am wake up. Must have had some sleep I suppose and it was nice and cosy sharing the bunks with 24 fellow climbers. Breakfast of as much carbohydrates as we could possibly manage and we were out on to the mountain by 5.15.

By head torch we slowly trudged up the mountain side walking close in line (it wasn’t until our descent that we realised the steepness of the ground and the narrowness of our snowy path. We had to ascend 1000 metres. Daylight came as we ascended the first shoulder of the mountain. Moroccan climbers took a moment to pray together kneeling in the snow. The going was tough and we needed to support each other as a team, reminding each other to take it slowly and pay attention to breathing.

I gave reviving heat treatment to Emma and Nikki who were suffering from the cold by unzipping my jackets and stuffing their hands into the warmth of my armpits; effective but the source of some jocularity at our evening meal (it seemed perfectly normal on the mountainside).

The later part of the climb included one or two quite exposed sections. The views were just spectacular. We all got to the top. Effort, altitude and cold had got to Nicky, and Will had to use a line to support her safely to the top and then again back down. We enjoyed sunshine, minimal wind and bread and cheese at the summit.

We had an obligatory group photo and astonishingly a squirrel scampered past. A German climber had taken skis to the top and made his descent with a flourish. We later saw him safely back at Base Camp. 5 hours up to the top, 3 hours to come down, a hot meal was waiting for us at Base Camp. We then had to walk the 4 hours back to our village gite.

Not in too bad a condition this morning; mine and David’s legs are a little stiff and I’ve yet to test out my left knee. Today we return to Marrakesh.

This week we have been really busy looking at all the information out there about COVID and looking at how we can make what we do with you work once again. We are now officially GOOD TO GO! ... See MoreSee Less