Before you ever head into the hills or the mountains, your last and final check should be the weather. Knowing what weather is forecast gives us information, and with this information you are in a better place to make decisions. Decisions about suitability of route choice, crag venue, what kit to pack and so on are all affected by the weather to come.

Some basics to understanding our weather

Have you ever wondered why America and Russia (on the same lines of latitude as us here in the UK) seem to have massively colder winters and massively hotter summers than us? Here’s why …

Consider placing 1Kg of soil and the same mass of water into an oven. You turn the heat right up. Which of these will reach boiling point first and which will cool fastest?

The answer is that the soil will heat up fastest and then will cool quickest. Knowing this helps us to understand some basics around the UK weather.

Thinking big here, we are an island (of soil) surrounded by a whole load of water. We have the Atlantic Ocean on our western shore and then not so far away, Europe to the east.

This in turn means that during the summer months the sea around us is slowly warming up. Then by around autumn, it will be at its peak temperature before it slowly loses heat through the winter months. Most of our weather comes from the south-west and also from the warm water called the Gulf Stream (which originates in the Gulf of Mexico). Similarly, during the summer, the ground quickly warms up, and then as the weather gets cooler the ground begins to haemorrhage heat too.

The effect of all this is that during winter we have warm seas around us making our temperatures higher relative to say the USA and Russia (which are big land masses) – hence we have less snow and less harsh winter conditions. Then during the summer months that same water which has chilled during the winter months now acts as a cooling influence allowing our summers to be cooler than say the USA and Russia.

More on the Gulf Stream … Sometimes factors skew the normal path of the Gulf Stream so that it bends further to the south during the winter months and so misses the UK altogether. When this occurs it gets cold really fast and we can expect a good dump of snow!

Where the weather comes from tells us lots …

Ok so knowing the above gives us a brief idea of what to expect if we know where the weather is coming from …  We know that to the north is the Arctic and to the south is Africa. So if we have weather coming from the north we expect it to be cold and dry. From the south, warm and dry. If it comes from the west it will be wet, from the north-west – cold and wet and so on. If it’s summer and the weather comes from the east it will be hot and dry, and in the winter cold and dry.

As a rock climber I also use this information to help guide me get the best from a day on the crag on wet-weather days. I know that as the winds from the west push the air upwards over the hills and mountains that the air will no longer hold any moisture and it will fall as rain. This is because as the moist air is pushed uphill and as the air pressure decreases, clouds will form and the rain is released.

With this in mind, I know that often when it’s raining in the Peak District, that it could well be dry further to the east, say at crag venues closer to Sheffield. Similarly I know that if it is raining in the mountains of Snowdonia it could well be dry at Tremadog on the coast – since these crags lie much lower down and the rain is yet to be released. 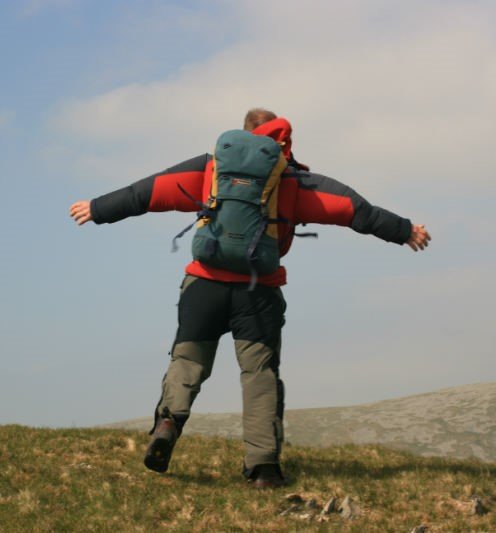 Knowing the wind speed and direction is vital information to have before heading out to the mountains for the day. On a dry day we might not want to choose to traverse precipitous ridge lines if we know that the wind speeds will be in excess of 30mph and perpendicular to our direction of travel for example. During the winter months knowing where the prevailing winds have been blowing will tell us which slopes may have a build up of snow (avalanche risk) and which are scoured of snow.

If you have no concept of what different wind speeds will feel like try putting your hand out of the window the next time you’re in a moving car as a passenger. How much resistance is there at 30mph? And at 50mph!?

Master the art of navigation with map and compass.

When planning a day out in the hills it also worth getting a dedicated mountain forecast that will give you information in greater detail including temperature changes due to height and/or wind speed. Knowing for example that above a certain altitude that temperatures could be reliably below zero will tell you not to go too high without be adequately equipped with crampons for example.

Learn more with Will4Adventure on one of our Hill Skills courses

So the start of Lizzy's first full week up in Sout

For the first time ever we have run our Overcome Y

A tad chilly, but a great day was had on our hill

Huge apologies but we can't bring you #5 of our Great Walks in the Peak District, this week. Our site is having a major update and I have promised not to add any more content this week. So instead how about reading this and getting lost less. Let us know what you think, like it, share it and comment are also welcome. www.will4adventure.com/advice/articles/ten-ways-to-be-better-at-map-reading/ ... See MoreSee Less

Already got navigation nailed? Then how about checking out these free navigation resources and putting your skills to the test: www.will4adventure.com/navigation-training-resources/

So the start of Lizzy's first full week up in South Yorkshire and with a rare Sunday off she headed out into the wettest Peak weather to attempt one of our orienteering courses. Using the Sporteering app she navigated around the course at Rud Hill and Burbage Moor near Ringinglow in 2hrs 22 mins despite falling in several holes along the way and sadly not beating Adam Clarke’s time of 1hr 30 mins! Find free navigation training resources on our website here and see how you can do: www.will4adventure.com/navigation-training-resources/